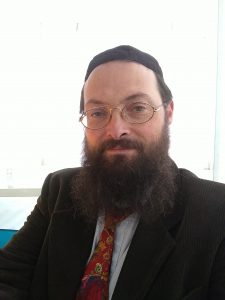 Rabbi Yechezkel Mandelbaum grew up in a mountain farmer’s family in the Swiss Alps. After discovering his Jewish roots during his Theology Studies at the University of Basel, he studied at various institutions in Israel and subsequently became a rabbinic assistant of the Admor mi Biale Ha Rav Benzion Rabbinowitz, then the community rabbi of Lugano, Switzerland. After assisting Rabbi Rabbinowitz there, Rabbi Mandelbaum, his wife and family moved to Israel, to advance their Jewish studies at the Kollel Hassidut Biale.

Whilst in Israel, he and his wife established the Ambuehl-Mandelbaum Foundation, a foundation for at risk teenagers from religious families, supporting and managing their recreational programmes under Rabbi Avraham Novick in the Swiss Alps.

When his wife Shulamit was offered a place to read Mathematics at Oxford University, the Mandelbaums moved to the United Kingdom and resumed their university studies. Rabbi Mandelbaum completed a BA with first class honours in Musicology, and a MA with distinction at Oxford-Brookes University.

While completing his Master’s degree, Rabbi Mandelbaum studied at Montefiore College in London to obtain semicha (rabbinical ordination). During this training, Rabbi Mandelbaum developed a keen interest in serving small communities, including Cheltenham, by ministering their High Holidays.

Rebbetzen Shulamit Mandelbaum was raised in a bilingual home, with a Swiss mother and a father who grew up in Sicily. She attended a 6th form boarding school in the UK, but returned to Switzerland where she later met Yechezkel. After studying at a seminary in Jerusalem, she married Rabbi Mandelbaum and they lived in Lugano, Switzerland.

After returning to the UK she obtained a Master’s degree in Mathematics in 2012 and an EPSRC scholarship for a postgraduate degree at the Doctoral Training Centre at Oxford, where she obtained a Masters of Science by Research. She was a cub scout leader in Oxford and also enjoys learning new languages and practising acquired ones.

Shulamit and Yechezkel were blessed with five children born in as many years. The children lived in Switzerland and Israel in their earlier childhood, but are now accustomed to living in England, where they have spent the greater part of their school years.

The Mandelbaum family likes to have an open house, and especially to have guests on Shabbat.