Kingston & Surbiton Synagogue recently held a drop-in centre for Ukrainian refugees, hosted by families in the local area. There were 34 guests in attendance, along with 8 volunteers including Rabbi Yechezkel and Rebbetzen Shulamit Mandelbaum. Among the guests visiting the centre were four members of the Ukrainian Orchestra, who had been touring the UK before the war started and found themselves stranded.

Volunteers offered the guests tea, a children’s play area with table tennis, befriending, and opportunities for the adults to receive support with things such as form-filling. Children were able to spend time playing together, and adults had the opportunity to meet with and speak to fellow refugees. Guests also received a selection of essential toiletries, packed at a session run by South Hampstead United Synagogue’s Youth Directors. The Kingston & Surbiton team wore yellow and blue ribbons, and had two Russian-speaking volunteers in attendance.

The United Synagogue’s Chesed department helped Kingston & Surbiton with the format of the afternoon and with which roles to assign volunteers, as well as donating the ingredients needed for the tea.

The organisation ‘Goods for Good’ donated 300 Vodafone UK SIM cards for US Chesed to use across its Asylum Seeker and Refugee Projects, and Kingston & Surbiton were the first to distribute some of these at the drop-in centre. US Chesed also received clothes and toys donated by ‘The Together Plan’.

Jill Prager, from Kingston & Surbiton Synagogue, said: “At one point, around six of the guests exchanged phone numbers, which was a very rewarding moment for us. Some of the children are already at local primary schools. It was a very successful afternoon – there was a real buzz in the shul and a friendly atmosphere. We all felt we had made a difference.” 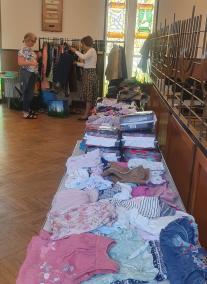