Yom HaZikaron, Memorial Day for the 23,741 I.D.F. soldiers tragically lost in defence of the State of Israel, and also the 3150 victims of terror attacks, was commemorated with a candlelighting ceremony during which Rabbi Mandelbaum recited Av Harachamim, the Memorial Prayer. Sarah Margolis and Shulamit Mandelbaum played evocative music in a flute duet, including the theme to “Schindler’s List”.  After the solemnity of Yom HaZikaron, celebrations for Israel’s 71st birthday followed with songs from the Kingston Choir, accompanied by Rabbi Mandlebaum on the piano and accordion.

The Kingston WIZO committee (and helpers) catered an Israeli-style buffet for the approximately 80 people who attended from across South West London, including many Christian friends of Israel. Among our special guests were Christina Jones from the Israeli Embassy and Councillo r Seema Kumar and Harjinder Powar from the Hindu and Sikh communities respectively.

Jack Green introduced a selection of short films illustrating how Israeli aid helps people worldwide, from Syrian casualties of the civil war who were treated in Israeli hospitals to MASHAV, Israel’s Agency for International Development Cooperation which has brought Israeli expertise to Latin America, Asia and Africa. Harjinder spoke about his cousins in India who had greatly benefited from the introduction of Israeli methods in agriculture. 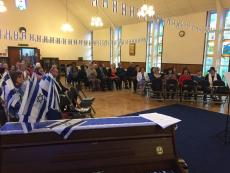 The evening, which was organised, co-ordinated and promoted by Anne Lyons, ended with community singing, accompanied by David Prager and Rabbi Mandlebaum on the piano and accordion and some impromptu Israeli dancing.